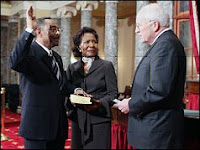 Trust me, we haven’t heard the end of this little fiasco. Enough said. . . oh by the way, I voted “I have mixed feelings”. Peace out,
Minerva
Posted by Minerva at 7:19 AM No comments: 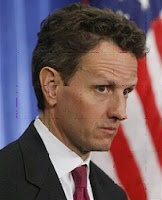 John Kerry calls it “a definite embarrassment”, however it is difficult for the IMF to determine their tax levels. Senator Harry Reid calls it a “hiccup”. John Kyle said a thorough investigation is needed. MSNBC said that Obama’s transition team announced it “as a common mistake” and that Tim is human, also agreeing that individuals who work in the International Monetary Fund underestimate the taxes and what they owe. The new selection of Tim Geithner doesn’t negate the quality of the man’s skills, acumen, and proficiency in understanding finances, as well as, the Treasury Department and how the systems work. An admitted “embarrassed” Wall Street player Timothy Geithner paid $34,000 in back taxes and late charges yesterday. He paid on the audited years and hadn’t paid on the unaudited years. He has experience with large bailouts and major financial trades. The Alabama Senator poised with Obama and Biden, representing the Republican Party said “it is not the time for a gotcha” over a situation that can be easily remedied, and as a party they aren’t interested in pointing fingers. He continued, “There is way too much at stake at this time for any of us (Republicans) to do this”. Obama cynics are still questioning whether or not this is the right person you would want to be collecting taxes for Americans who is not capable of filing his own. Apparently the Obama team knew this for five weeks and asked the Republicans for an extension of this appointment and to please be quiet about it. Republicans say they don’t want any more money being printed and passed out. Although originally Obama said he wanted to have his Secretary of the Treasury with him on Inaugural Day to calm Americans’ fears regarding the economy, we learn this today. To do so, he indicated that his team “was on it” and implementing measures for a serious financial stimulus.

Hillary Clinton has obviously gained the respect of the Republicans and there was some contention with Senator Lugar and Senate Vetter regarding the amounts of money that Bill is receiving from his library foundation. Mike Allen from Politico.com calls the response by the republicans more of “a belly scratch” given to a puppy. They seem thrilled that Clinton is the Secretary of State pick for the Obama team. MOU’s have been looked at broadly. There isn’t any intention of changing the MOU. Hillary says that no president has ever disclosed the amounts and identification, she said her husband provided, which was unprecedented. Clinton’s Global Initiative has always been public.

Steve Jobs dismissed the rumors that he has serious health conditions and some economists wonder if this is reason behind the Apple stock dropping also. Having been diagnosed with pancreatic cancer in the past, the rumor is that the condition has returned.

Lesson here: As much as Obama may mean well, he can plan for the good, but sometimes negative situations have to be cleaned up first, quickly, and concisely, which may also slow the original course. And last that I checked, as long as you are dealing with other humans, he can expect sometimes they may “hiccup”.
Posted by Minerva at 7:03 AM No comments: