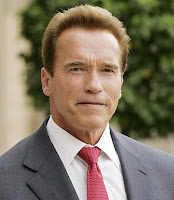 Are we really surprised to hear that the former Governator has sired a child? I am not.
Is this a little titillation? No. Is this a disappointment? No.
In the beginning of Schwarzenegger’s announcement for governor, the public decided to allow him a pass when Maria said, “trust me” and stood by her man and this is after 15 women came forward, some with pictures. Voters gave him a quick wink, an augh “He’s the terminator” and voted him in office anyway.
We believed he had married one of our finest from the famous Kennedy family and Arnold would walk and talk straight. It is called “a second chance”. I saw the ladies of “THE VIEW” hammering away and listened to the exchange between Chris Matthews and Bill Maher about Arnold, see reference sites below.
I am wondering where was the press and political staff that they kept all of this a 14-year secret?
And no one from his staff knew? We learn from the LA Times that http://times.am/2011/05/18/western-media-arnold-schwarzenegger-is-a-liar/, in 2001, “. . . according to Garry South, the strategist for then-Gov. Gray Davis, word got around that Schwarzenegger was mulling a challenge – so South began circulating copies of a Premiere magazine exposé detailing the actor’s alleged groping of women.
“His lawyer sent me a letter threatening to sue me for libel, and he also threatened to sue for copyright infringement if I sent out any part of his letter,” South said.
SO how could the woman stay employed and pregnant in the household knowing her relationship with Arnold while having a presumably very private and close relationship with Maria, I guess we will hear from the tabloids. To hear he has financially assisted the staffer and child however has been great news.
But to hear that this illicit affair occurred with a member of the household staff blows protected sex, “fidelity”, family values and harassment in the work place to an all-time high.
But as they say, Karma will swing you back again and so in January, the housekeeper retires and Schwarzenegger tells the truth. We heard that Maria left but we never knew why.
Life goes on but we hear that The LA Times promised to reveal the truth and hence the news comes forward. As for the girly man, “The Gropenator”, this man vetoed “marriage equality twice”.
He owes Californians’ an apology for putting his political ambitions before his family. There are years of fatherhood that the child has lost. Hope Arnold can live with the hypocrisy and be the manly man to those involved.
As for Maria and the rest of the family, we wish Maria a speedy recovering in reaffirming the family love, stability, trust and moving on with a stellar journalistic career, her Minerva service awards or whatever she decides to do.
REFERENCES:
Chris Matthews with Bill Maher http://www.huffingtonpost.com/2011/05/18/bill-maher-schwarzenegger-gingrich_n_863643.html
“The View” Ladies http://www.huffingtonpost.com/2011/05/17/arnold-schwarzenegger-the-view_n_863207.html
Posted by Minerva at 11:22 AM No comments: